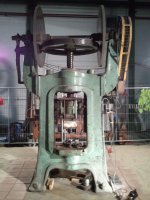 The press that mints the coins is an original Dutrannoit from 1910. The technique of this friction press is actually very simple.

A 380V traction motor keeps two flywheels in a constant speed. Between the two flywheels, which are positioned on a single axis moved by a handle, is a horizontal friction wheel. As soon as one of the flywheels is being pushed against the friction wheel, the screw spindle starts rotating and the tapping block is moving up or down. The movement downwards gives in a big momentum, which ultimately results in the heavy blow on the workpiece. 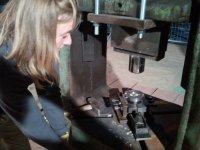 The force of the blow defines the quality of the coin. With the Dutrannoit this is 120 tons, sufficient to melt any metal. The coin`s material `flows` into the upper and lower stamp.

In the usual production process the coins are stamped onto a metal strip. Afterwards another machine press cuts the circular coins out of the strip. 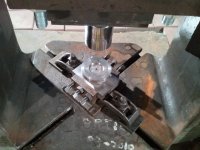 We however, mint our coins in one go. Over the bottom stamp a ring is placed, containing a so called `rondel`, a 3 mm thick disc slightly smaller in diameter than the coin. So the metal flows between the stamps onto the sides until it is stopped by the ring. Thus after every blow the coin thus gets stuck in the ring and has to be tapped out with a hard plastic dowel.

Because the upper stamp has to fall exactly in the ring, this method is more critical than the normal way where the coins are pressed onto a strip. However this always results in perfectly positioned coins.

For the connoisseurs: all our coins are Proof quality, meaning that stamps as well as rondells are polished and the coins are minted with a minimum force of 100 ton. Proof is the highest quality possible. Due to the extra shine the image in Proof coins is especially sharp and beautiful, but also very vulnerable. In the polished parts even the smallest scratches will be visible. Also the grease of our skins effects the metal. So really one should only touch them while wearing gloves. To avoid damage all our coins are wrapped in a capsule.